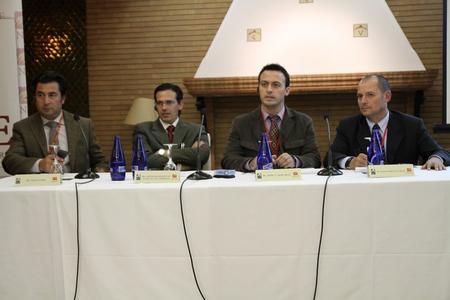 In 2011, ANCCE organized the annual meeting of the World Breeding Federation for Sport Horses.  This organization is made up of representatives from all of the equine breeds in the world.

From the 24th to the 26th of October, the city of Sevilla played host to the WBFSH, World Breeding Federation for Sport Horses annual meeting, which, on this occasion, brought together more than 100 representatives from all those breeder associations that handle the stud books for the many horse breeds of the world.  Likewise, members of the International Equestrian Federation (FEI) also participated in the event, as well as other organizations within the sector.

This event, held in a different country every year, discusses a variety of topics, but all linked to the various stud books, breeding and world (equestrian) sports.  For the first time, the convention was organized in Spain and hosted by ANCCE, the National PRE Breeders’ Association of Spain, with the sponsorship of PAVO, the horse feed company.

At the closing ceremony, José Juan Morales, vice-president of ANCCE, stated that, “for ANCCE, it is a true honor to organize this annual event in the city of Sevilla, due to which, for a few days, we were the world class center of the horse world.”  Also, he underlined the success of the meeting and the importance it has for the Purebred Spanish Horse, given that ANCCE was able to explain the historic characteristics and qualities of the breed, its conformation, functions and most important genetics, as well as the fact that the PRE Stud Book is the only stud book in Spain with ISO 9001 certification.  Likewise, the breed has extraordinary functional potential as a sport horse, independently of the discipline it is competing in.

Morales also stated that this meeting was the ideal showcase to exhibit the work and objectives of ANCCE in terms of the Genetic Breeding Program and the PRE Stud Book, while at the same time emphasizing its commitment to cooperate with other breeds and those representing those breeds.   He assured that this event contributed to increasing interest in the PRE among breeders of other breeds, which, at the same time, favored international sales of PRE horses.  Lastly, he honored the work of breeders in times of crisis, especially those who intervene in the horse world and invited everyone to visit SICAB, the most important single-theme trade show dedicated to a single breed, to deepen their knowledge and enjoy the PRE.

At the convention, representatives from the Ministry of the Environment and Rural and Marine Affairs General Office for Agricultural Resources and Stock Breeding offered their perspective, as well as important figures from the equestrian world, international breeder associations, and the WBFSH General Assembly.  The conferences and round tables were supported with guided tours of PRE Stud Farms, as well as other shows and centers dedicated to equestrian art, such as the Royal School in Jerez de la Frontera.

Jan Pedersen, president of the WBFSH, concluded the annual meeting and underscored the quality of “the presentations and very interesting speeches we listened to during the event, as well as the warm and wonderful atmosphere offered during the many activities.  We are returning home thrilled to have met experts who are so well prepared in their fields of interest, which has inspired us, and their knowledge will no doubt help us to put them into practice with our own breeds.”

With such an event being held in Sevilla, it turns the city into an international point of reference for the sector, not only from the economic point of view, but also from the social and cultural standpoint.   Selecting the city to host this international meeting supports the city’s commitment with equestrian activities, where SICAB is held annually.  This event is an ANCCE success story, which recognizes the efforts of the PRE Stud Book office and the PRE Breeding Program.

The World Breeding Federation for Sport Horses (WBFSH) is the only sport horse stud book federation in the world, and the main connection between sport horse breeder associations and the FEI (International Equestrian Federation).  This organization is composed of 65 associations from countries the world over, as well as associate members.  Its main goal is to stimulate the breeding of sport horses at international level and cooperation among members of the various stud books, as well as representing the common interests of the sector.  ANCCE is the only association in Spain that is a member of this Federation.